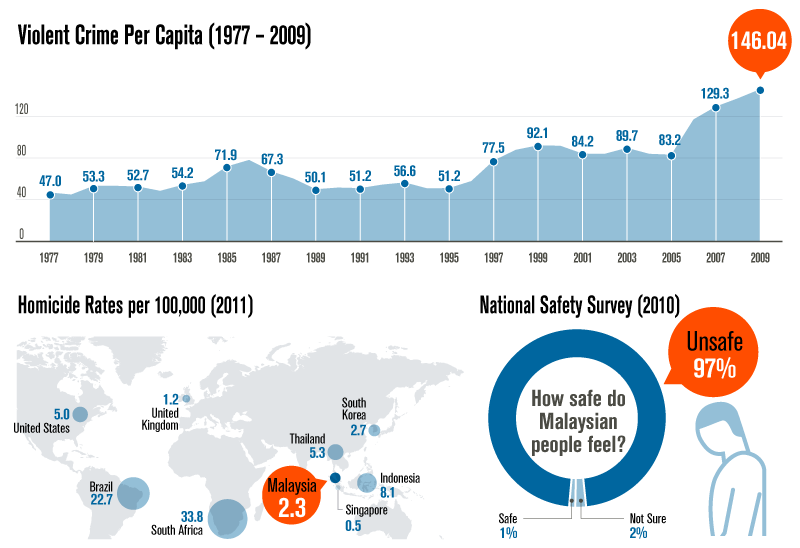 During the audit, the crime rate for the year 2011 was not made available.  However, the data gathered from a 2010 study of crime trends and patterns over the past 30 years indicates that the crime rate has increased.  It is not clear whether the data reflects a general trend that more people are resorting to crime or more people are reporting crime. Establishing the crime rate remains an inexact science - what is captured and what is left out? These are perennial questions. Police may focus on the number of arrests made while victim surveys provide more extensive and comparable data since they capture also crimes that are not reported to the police. The audit found data on neither.

A common proxy or threshold used for violent crime is the homicide rate. As is shown in Slide 5 this stands at 2.3:100,000 in Malaysia which is low when seen against global statistics citing 7.6:100,000 as the international mean figure.

Malaysia appears to lead in comparison to other countries in the region on rape statistics, registering 12:100,000 . However, a substantial proportion of those in prison (especially those persons under 21) for rape were convicted of statutory rape (the common view of prison officers and DPPs was that most cases involved unlawful but consensual sexual intercourse with a girlfriend and that the parents had brought the matter to the attention of the police). It is further noted that the rate of 12:100,000 is low when compared to other countries outside the Southeast Asian region.

The public in most countries is skeptical of such figures as they can be read or ‘spun’ in various ways. Figures alone do little to reassure a public that is fearful.

The incidents of ‘snatch theft’ in Kuala Lumpur may be a concern to citizens living in the capital area (where snatch theft cases are said to occur on an average 190:100,000 per year) but to those living outside Kuala Lumpur, these incidents are less frequent.  Commonly, a crime committed by young persons, less than 1% of young persons in Approved Schools were convicted of this category of offence  - see Juvenile Justice below.

The picture that emerges is confusing as the crime could either be under-reported and there is substance to popular apprehensions; or the crime rate is in actual fact low and the fears of ordinary people are without proper basis.   The audit can reach no conclusion either way.

Who is committing the crime?

The ethnic breakdown of prisoners and offenders appears to match broadly the ethnic make-up of the country: no ethnic group is represented highly disproportionately in the system. The one category that is unusual is that of foreign nationals. The proportion in the prison population represents about 22% of the total in 2010.  Most of these are persons who have breached immigration laws.