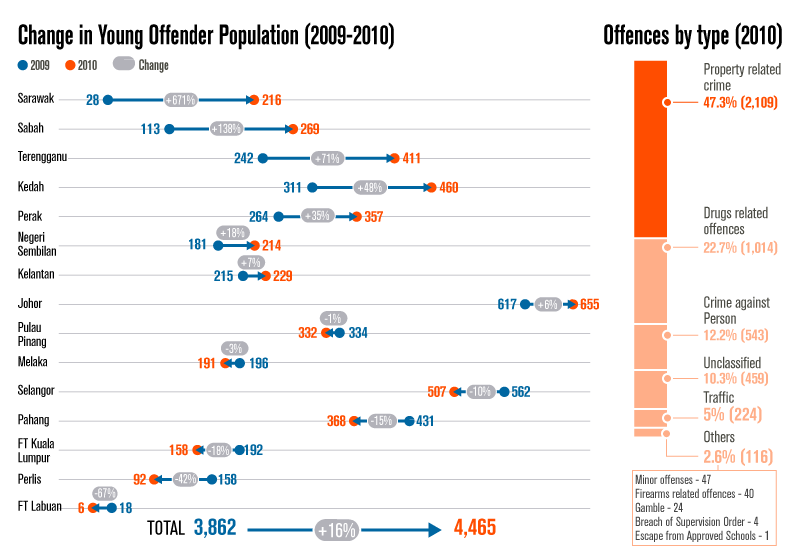 A child is defined as a person under the age of 18 years.1 A child under the age of 10 years is not deemed to be criminally responsible for their actions.2 Furthermore, any act of a chile who is above 10 and less than 12 years of age is not an offence if the child has insuffiecient maturity to understand and judge the nature and consequences of his/her conduct.

Persons under 18 are tried in Courts for Children which are presided over by a Magistrate and two Court advisors (one of whom must be a woman). The Child Act sets out clear provisions for the operation of these courts and protection of the young person in line with the Convention on the Rights of the Child.

There is a dedicated Court for Children in KL, elsewhere the court is specially constituted by a designated magistrate. There appears to be no special training for Magistrates on the Child Act or the treatment of young persons.3 The Court Advisors (drawn from a local roster of retired public servants, generally former social workers, probation officers, or teachers) participate in a five-day training programme. Their main function is to advise the Magistrate with respect to sentencing and to give advice to parents.

As with adults, young persons from poor backgrounds are unlikely to obtain legal advice or assistance on arrest, in pre-trial or trial proceedings. The Child Act states in general terms that children have the right to be legally represented for the purposes of preparing and presenting their defence and where a child is not legally represented, his/her parents, guardian, relative, or responsible person may assist him or her in the case.4

The most common offences committed by young persons appear to be:

The Probation department estimates that some 50% are released on bond for good behaviour. The rest pass into the criminal justice system and, where sanctioned, are sent either to a Probation Hostel (PH), or Approved School (AS) – both run by the probation department; or in serious matters (or where they escape from the AS or PH), may be sent to a Henry Gurney School (HGS).

Those children ‘beyond control’ appear as ‘unclassified’ matters in Slide 22. Under this provision of the Child Act, parents may refer (through a probation officer) to the court for a control order as a response to children committing status offences (such as running away from home, engaging in sexual behaviour, being involved in drugs, being repeatedly disobedient to parents). Where a court order is made, the young person is sent to a Probation Hostel (PH) or Approved School (AS) for a period of three years (regardless of the progress the young person may make). Young persons who run away on capture can be transferred to a Henry Gurney School (HG) under the prisons administration.

Another significant caseload of young persons (under 21) are those charged or convicted of [statutory] rape. On enquiry this often revolved around circumstances that suggested the relationship was consensual (boyfriend/girlfriend) but the girl was under the age of 16. The view of both prison officers and prosecutors was that the facts invariably involved consensual, under-age, sex.

‘Snatch’ theft was often a source of complaint by members of the public. However the figures from prisons and AS showed less than 1% of the young persons in custody were convicted of such offences.

Sentencing options available to the Court for Children includes the following:

Malaysia has recently enacted legislation to introduce community service work programmes as an alternative to imprisonment. However, the programme is currently only applicable to offenders who are over the age of 18.

There are no formal diversion programmes or processes for resolving minor offences through mediation or some other restorative approaches, although the Deputy Public Prosecutors has the discretion to discontinue proceedings which provides the legal basis for adopting such an approach. At present, the police and Deputy Public Prosecutors can either proceed to prosecute or dismiss charges, there is no mechanism for the offender to make a formal apology and offer restitution or compensation nor any guidelines or standard procedures to encourage the use of prosecutorial discretion in children’s cases and no formal process for screening all cases for possible diversion. The discretion to withdraw a charge is reportedly used quite sparingly, and generally only in cases where there is insufficient evidence to prove the offence.

The trend globally has been to shift away from institutional approaches, investing instead in the development of diversion and other community-based responses to child offending. Increasingly, formal Court process and institutional placements are reserved for persistent offenders and children who commit very serious crimes, with all other children being dealt with more effectively through community based processes.

1 Child Act 2001 in line with the Convention on the Rights of the Child ratified by Malaysia.