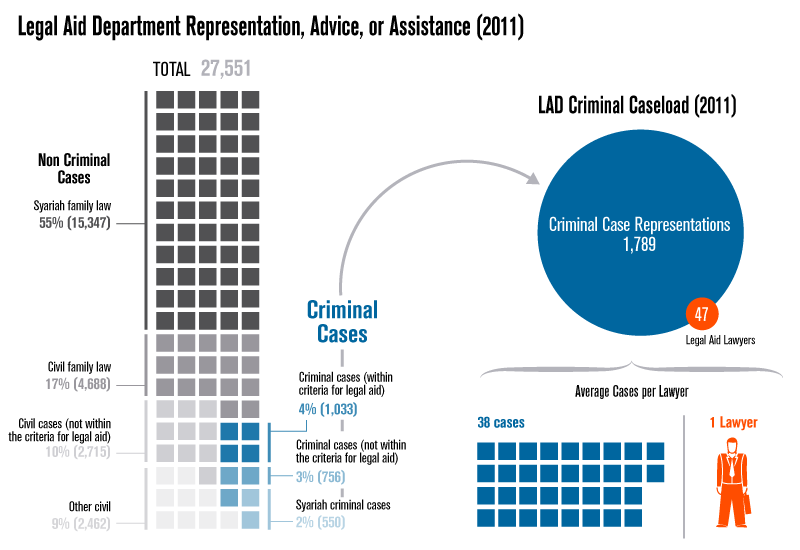 Legal aid is currently provided by the State through the Legal Aid Department and the Bar through a range of pro bono services delivered in Legal Aid Centres on the Peninsular. In Sabah, there is a Legal Aid Sub-Committee organized by the Sabah Law Association.

Legal aid as provided by the state (through the Legal Aid Department) is restricted to:

As noted in slide (3), there is an absence of legal advice, assistance and representation – particularly at the time of arrest and detention.

The Bar has also established Legal Aid Centres (LAC) in Peninsular Malaysia which offers a patchwork of services mainly in the urban centres of each State.

By way of response to the report that an estimate 8-0% of those tried in the lower courts for criminal offences did not have legal representation, the Prime Minister of Malaysia launched the National Legal Aid Foundation in 2011 to provide legal services nationally at all stages of the criminal justice process, starting in the police station. The NLAF is in its infancy at the time of the audit and is discussed further below.

The Community of Lawyers

Most of these lawyers are urban based (74%), in common with the displacement of lawyers in most countries.

In terms of criminal law specialists, there are estimated to be 300 nationally. Based on the field visits during this audit, it is estimated that the number of lawyers specializing in criminal law are as follows:

The Bar Council in Kuala Lumpur estimates that there are an additional 1,000 lawyers who will take criminal cases ‘from time to time’ but who primarily practice civil law.

Lawyers starting up practice in Kuala Lumpur and Penang (island) can expect to earn RM2,500 pcm. In Penang (mainland) and other more rural areas, income will drop to approximately RM2,000 pcm. The start-up income compares with the income in the Judicial and Legal Service (and is less when benefits are taken into account). However, the rise in income is likely to be sharper depending on the ability of the lawyer and the standing of his/her firm. Lawyers in Penang noted that a young lawyer starting out in his own law firm can expect to gross RM5000 per month.

While there is no set fee rate for individual lawyers, the average all-in fee for representation in the High Court appears to be around RM15,000.

The Legal Aid Department (LAD) in 2011 had 82 legal officers (35 specialising in syariah cases, 47 generalists) posted at 23 branches all over Malaysia. The officers are assigned from the Attorney General’s Chambers with similar terms and conditions of service to prosecutors of comparative experience. In addition, the lawyers are supplemented by 70 ‘paralegals’ who provide advice and assistance. The paralegals have a diploma and learn ‘on the job’.

Legal aid in criminal proceedings is subject to the conditions cited above and a means test which limits free legal representation to any applicant whose income does not exceed RM25,000 per annum ($8,000).

The LAD provided legal advice and assistance around the country in 2011 through 161 legal aid clinics in various prisons, 1,017 legal aid clinics in community halls and  267 ‘one-stop-centres’ in courts. Any report on the impact of this outreach work (i.e. from user surveys or otherwise) was either not undertaken or not made available to the audit team at the time.

The total budget of the LAD in 2011 was RM19 million, out of which RM 2.5 million is the operational budget (not inclusive of salary).

The Malaysian Bar established a number of Legal Aid Centres (LACs) in Peninsular Malaysia funded by lawyers’ contributions of RM100 per lawyer each year. The LACs provide pro bono advice, assistance and representation. A resolution was passed by the Bar Council requiring each lawyer to do one case free of charge each year. It appears not to be enforced. They appear to operate independently without central co-ordination.

It has been generally observed that legal assistance to indigent accused persons is ‘inadequate’  and most prisoners are not represented in court.  These general observations are supported by the findings of the audit team during the visit to the following prisons:

The National Legal Aid Foundation (NLAF) was launched by the Prime Minister in April on 25 February 2011 as a direct response to the lack of legal advice, assistance and representation to those without means in conflict with the law.

The NLAF comprises a roster of lawyers. By the end of 2011, 500 lawyers had signed on to the roster nationally against an expectation of 1500-2000 lawyers. The NLAF as of February 2012 had yet to start operating.

The conditions which need to be met in order to qualify for legal representation and advice in criminal matters are similar to the LAD, save that where a person earns between RM25,000-36,000 he/she may qualify on the condition that the applicant is charged RM 300 by way of nominal fees.

Legal assistance provided by the NLAF covers all types of criminal offences, with the exception of those which carry the death penalty as the court already assigns counsel for such offences.

The NLAF will provide legal assistance to all persons in the following situations:
a)    Upon arrest: The police or other enforcement agencies must inform the arrested person of his/her right to be represented by a lawyer and will contact the duty solicitor to represent the arrested person subject to Section 28A of Criminal Procedure Code - unless the arrested person wishes to utilise his/her own lawyer.

c)    Charged in court and bail application: The accused will be represented by a lawyer when charged and when applying for bail.

d)    Hearing in Court: During this stage, in order to receive legal representation the accused person must satisfy the means test.

The NLAF has signed Memoranda of Understanding with 48 justice agencies across the country.

The introduction of the NLAF is likely to challenge existing ways of doing business – not only in police stations, but also in the courts. The Remand Court in KL Kuala Lumpur, for instance, disposes on average per day 100-120 remandees. The process is quickly over since the overwhelming majority are not represented (90% was suggested ). It can be envisaged that the processing of such a number of cases where representation is available will protract the process.

The quality of services provided by the LAD is monitored via ‘client satisfaction’ forms handed to clients. In 2010, the LAD received 31 complaints; in 2011, 27 complaints.

As for members of the Bar, press reports indicated the Advocates and Solicitors Disciplinary Board receives an average of 900 complaints each year, including for committing criminal breach of trust and breaching of solicitor’s ethics. Between January and May 2011, the board received 538 complaints.

In the past five years, 144 lawyers have been disbarred following disciplinary hearings.