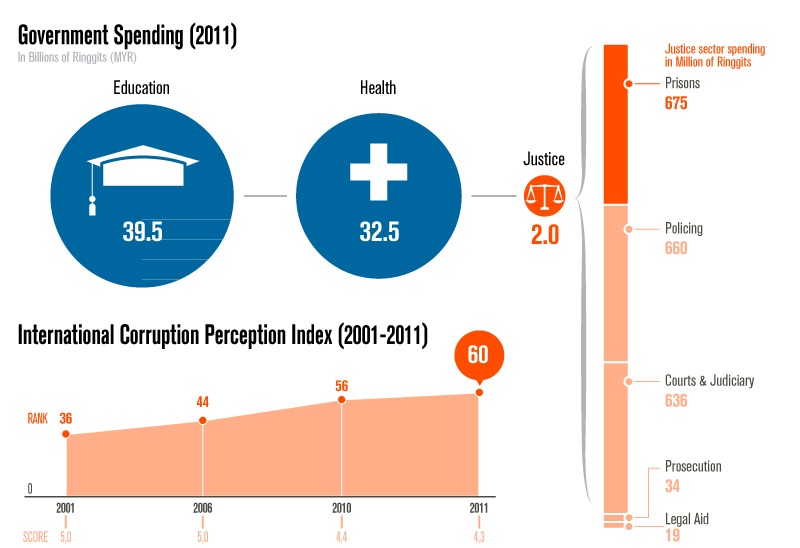 The country has a population of 28 million which is made up of approximately 58% Malay, 28% Chinese, 7% Indian with the balance made up of groups officially referred to as ‘native’ (Sarawak mainly Iban; Sabah mainly Kadazan or Dusun) and aborigines.  Approximately 79% of the country’s population lives in the Peninsular and 72% are urban based.  The population under 15 years has gone down to 27% in 2010 from 33% in 2001.

The budget allocation to the justice sector (figures collected in the course of the audit) is probably on the low side. The total spending on the justice sector (at the lowest) is calculated as RM 2 billion (or USD 67 per capita, assuming a population of 30 million).  The spending on education and health is not to compare apples and oranges so much as to indicate the value placed on each sector.

However, the allocation of just over RM 1 per capita on legal aid  – or approximately US 30 cents – may be considered low.

The justice sector generates a surprisingly high income for the consolidated fund. In 2011, the courts generated RM 351.4 million (up from RM 210 million in 2010) from fines and court fees.  The Prosecution Division of the AGC generated income of RM 30 million under the Anti-Money Laundering and Anti-Terrorism Financing Act (AMLATFA) alone in 2011 (account is not taken of the income raised by the Forfeiture of Property Unit under the DDA, which in 2009 generated RM 8.3 million from 37 cases.  It is estimated that the amounts recovered by the law enforcement agencies from taxation and corrupt activities also recovers substantial sums for government.

The average monthly outgoings for a family of four persons is RM 2,190.  Present pay levels place all those starting out whether as prosecutors, magistrates, police or prison officers in the low income bracket.

It is not apparent in Malaysia whether the ‘coping mechanisms’ adopted elsewhere ‘to make ends meet’ is a feature. What is apparent is that incidents of ‘petty’ corruption are down with only 9% of those surveyed having paid a bribe to police in the previous 12 months (the same as in Singapore).

On the other hand, the trend in the perception of grand corruption appears to be worsening. In 2001, Malaysia ranked 36th with a score of 5 on the Corruption Perception Index. In December 2011 it ranked 60th with a score of 4.3 (2006: 44th and 2010: 56th). This has been noted in the Government Transformation Programme road map.

No survey was conducted of court users; however, it was observed that, when previously ‘leverage’ might be applied to advance a case through the system, today this had fallen away as cases were proceeding expeditiously through the system.